The Bronze Dog: Stories of the Chinese Zodiac (Chinese_simplified-English) 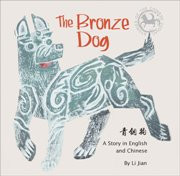 The Bronze Dog: Stories of the Chinese Zodiac (Chinese_simplified-English)

Once upon a time, at the foot of the mountains called Zhongnan in the Shaanxi Province of China, there were two brothers who lived alone and depended on each other. One day, the elder one dug out a bronze dog while tilling which made the brothers very happy, as they could sell it for money. But unexpectedly, the bronze dog suddenly got bigger and swallowed the elder brother. Having seen this, the younger one rushed to find a hammer, intending to smash the bronze dog to save his brother. In order not to be destroyed, the bronze dog promised to give the young boy three gifts which he wanted most. But he told the dog he would rather ask for nothing but his brother. The bronze dog was deeply moved by the love between the two brothers, so it spat the elder one out and magically turned into a real dog. Luckily, the brothers got a new companion, and all of them lived happily ever after.