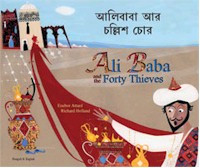 A long time ago in Arabia, on a full night, Ali Baba noticed something very strange as he gathered firewood. A rumbling sound, like thunder, came not from the sky but from beneath the earth... Richard Holland's brilliant use of collage captures the essence of this classic tale.

Books for Keeps
This is the story that has given the world the famous magic phrase 'Open Sesame'. It is a well-known classic tale from ancient Arabia, popular throughout the world which has been translated into many languages. This picture book version is in Hindi/English and both the languages have a simple, brief and traditional style of narrating the story which excites curiosity and the desire to know what happens next. It is the story of an ordinary and naive man called Ali Baba who accidentally experiences a strange phenomenon that changes his life but only through the quick wit and intelligence of the young maidservant, Morgianna, who manages to kill 40 thieves and their leader Ka-eed. The lively illustrations and the positioning of the text in two languages are very impressive. In addition the expressions on the faces of the characters help create the atmosphere and the spirit of the story which is sure to capture the interest of young readers. This is a very good book to read aloud to the class.