Adventures Of The Treasure Fleet: China Discovers The World 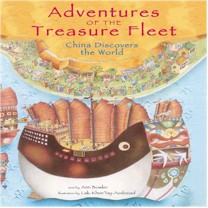 Adventures Of The Treasure Fleet: China Discovers The World

Did you know that 85 years before Columbus discovered America, Chinese ships longer than a football field sailed thousands of miles through unknown oceans and visited more than 30 nations? It s true! Adventures of the Treasure Fleet is the amazing story of these seven epic voyages and they're larger-than-life commander, Admiral Zheng He.

Beginning in 1405, Admiral Zheng He led more than 300 gigantic, brightly-painted ships across the South China Sea to the Indian Ocean and all the way to the distant coast of Africa. The admiral and his crew battled pirates and raging storms, and were amazed by the people and ways of life in distant lands. At each port, Chinese goods were traded for pearls, precious stones, herbs and medicines which were given as tribute to China's powerful emperor when the ships' returned home.

Filled with historical facts, Adventures of the Treasure Fleet brings a fantastic piece of history to life. Gracefully told and beautifully illustrated, the story s fast pace will keep young ones captivated while offering enough information to satisfy curious readers of all ages.